The Canadian government was actively involved in this year’s summit. It organized a send-off party for the Japanese delegation before the start of the summit at the Embassy of Canada in Japan. Prime Minister Trudeau gave a speech in front of the parliament building as part of the opening ceremony of the summit, and a national welcome party for the guests was held.

Ms. Marschallek and Mr. Satake participated in discussions and workshops for international sessions and in networking sessions. They engaged in dialogue on a wide range of topics, including climate change, war and peace, refugees and immigrants, human rights, education, leadership, and social business.

After the summit ended, the two student representatives exchanged views with advisor Yokoi on their experiences and their aspirations going forward. Ms. Marschallek said that the conference was “a life-changing experience.” Mr. Satake said that it increased his concern for social issues.

This year was the seventh year of OYW. About 1,300 people from 196 countries around the world participated. The 2017 summit is scheduled to be held in Bogotá, the capital of Colombia.

International Affairs Division, Center for Global Partnerships and Education
kokusai(a)adm.okayama-u.ac.jp
For inquiries, please contact us by replacing (a) with the @ mark. 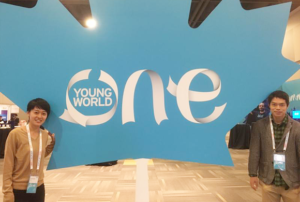 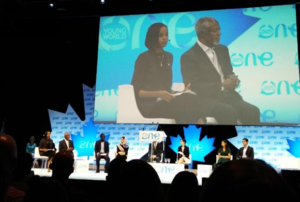 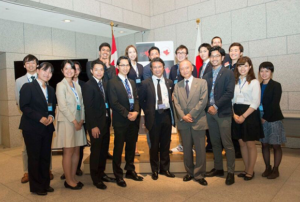 Send-off party at the Embassy of Canada in Japan

Scene of the day

Scene of the campus debriefing session

A student representative of our university attended a send-off party for the Japanese delegation to the World Youth Summit 2016.

OYW is called a life-changing event. Just like its name, the speeches that you hear at OYW and the like-minded people that you meet will be an irreplaceable inspiration in your life and help guide you. Okayama University is the only university in the world that will fully support the expenses to participate in OYW! I really hope that many people will give it a go.

Know the trajectory of people around the world and refer to it for your future steps. At OYW, people involved in creative efforts to solve social issues gather in one place. It’s a place for receiving their messages as well as conveying your own. You should definitely interact with everyone at OYW and gain the courage and inspiration to lead society.